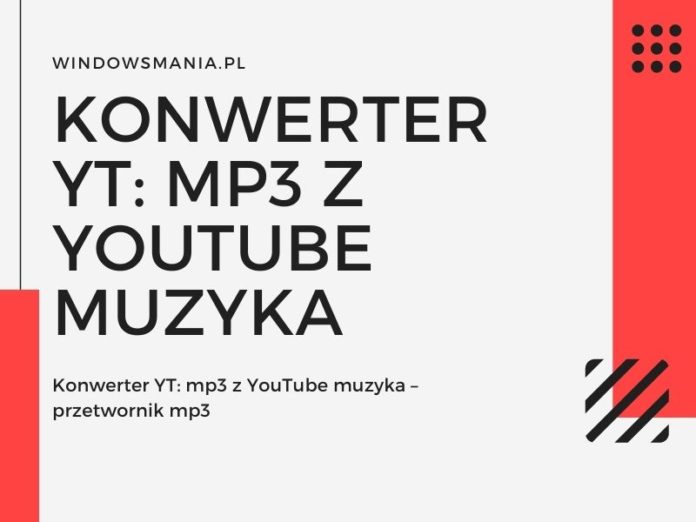 Music from YouTube has been one of the main sources of listening to hits in recent years. Entire playlists resemble old albums, and the best hits can be listened to one at a time. And what to do when music from YT is not enough and you want to change its format? Read about how to use the YT - mp3 converter.

In theory, YouTube music shouldn't be successful. Its quality is quite low, and sitting in front of the screen to listen to music seems not very intuitive. However, it wins with practicality and a large choice. On Youtube you can find whole playlists, songs for children, audiobooks and hits. This means that each song is always at hand and you no longer have to search for CDs or download songs. While working at the computer, this allows you to listen to any music from Youtube without any time limits. Playlists, audiobooks and pre-recorded CDs can be up to several hours long, so you don't have to constantly change the music.

When is it better to translate YouTube music to MP3?

However, there are situations where music from Youtube is not enough. Carrying a laptop around the house is impractical when, for example, cooking or cleaning. In addition, YT music on the phone turns off when the screen goes blank, so in practice you can't play it in the background while doing other things. Finally, the poor quality of music on YouTube itself, in combination with the speakers of the phone or laptop, can make your ears hurt after a short time. In these situations, an mp3-YT converter will come in handy.

How does the YT converter work?

Thanks to the YT converter, it is possible to convert the music format from YouTube to MP3. The latter format can be downloaded and saved on your computer or phone, and then played using any of the popular music programs. Thanks to the YT converter, you can also transfer the music later from your computer to MP3 or record it on a disc and play it in the car. Then it will be easier for you to listen to it, e.g. in the kitchen or while driving, and in a quality that is gentler on the ears than music from YouTube.

To transfer music from YouTube to MP3, you just need to install a special program or use one on-line. The former will be more practical if you transfer a lot of songs from YT to MP3. When you only want to save one audiobook or song, the online program is all you need. The principle of operation is usually very simple and it works like this with most Youtube-MP3 converters:

What are the alternatives?

Although Youtube-MP3 converters have been on the market for over a decade, it is still the best solution that makes life much easier in many everyday situations. After downloading, the songs from YouTube in MP3 are ad-free and you can also play them without the Internet.

In fact, the only alternative, and to a limited extent, is to connect a computer or telephone via Bluetooth to the tower or car radio. The songs are then not saved, but only played, assuming that you have access to the network.

Downloading music or videos from YouTube, is only possible through dedicated online services or applications. However, if we decide to extract the mp3 soundtrack from the downloaded movie, it will be necessary YT converter.

On the Internet you can find a group of paid options, or those that are only seemingly free. Below are presented completely free ways to download from yt, which do not reduce the quality of files for the user and are completely free. In some of them you just need to download the file in others to get mp3 youtube copy the link, paste and click download - you'll see that it's easy!

If you are looking for something on YouTube only to use and download the sound present in a given movie, it is worth using this option when you decide to download an mp3 file. For this you will need one of the free YouTube Downloader 4.6.1094, thanks to which we can easily download mp3 files from YT via the Polish Komputer Świat server.

For example, for YouTube mp3, you can use the YouTube converter and choose only the output mp3 (YT) file, then save it to a folder on your computer.

Mp3 converter from files saved in the past

100% sure and free as a YouTube converter, you can turn out to be VLC Media Player. It is a free multimedia harvester, perfect for playing music and movies, but not only. This YouTube downloader is free to download from the developer's server. It is essential to use the version of the program that matches the version Windowsthat we have in our computer (most often it is Windows 10 64 bit).

However, if we want to decide only to download the soundtrack in mp3 format, we only need to enter File / Convert / Save.

Then we choose the place of the file that is to be converted and the place where we want to save it as an mp3 mp4 file. Thanks to the use of this YouTube converter, we will not only isolate the sound, but also allow us to choose different video formats. Among which there are not only the most popular mp3, but also MP4, FLAC or OGG.

As you can see, we don't have to pay to use the YT converter. It also does not have to take up a significant amount of space on our hard drive. The YouTube converter in the form of the VLC program takes only 200MB and does not have too high requirements for the equipment on which it is to be installed.

It is worth remembering that YouTube makes music and videos available only under strict license conditions. They should not be forgotten, bearing in mind the provisions of Polish law regarding sharing and copying content on the Internet.

It is a site where you just need to enter the url of YouTube videos. This you tube dowlander guarantees the best solutions for converting audio and video files to MP3 and MP4 HD shared on YouTube. They use files that are of the highest quality in order to get the final YouTube MP3 files.

Systems on which the mp3 converter works

It can be used on any operating system. The producer made sure that anyone interested in converting YouTube to MP3 and other similar formats was satisfied with the use of the service. Youtube downloader works not only on Windows, but also on Linux and MacOS.

Internet domain - everything you need to know about it

Maniak - 21 June, 2021
0
Nowadays, websites have many functions and are becoming something common and open to every Internet user. They can be their ...

How to create an event on Facebook and how to change its status from ...

How to mark a point on a Google Map?

Canva - a graphics program designed with ease of use in mind

How to set line spacing in Word?

The taskbar does not disappear? How to hide the taskbar in Windows?

How to turn on the compass on Google Maps?

How to number pages in Word?

Combine pdf files - how to combine them? use an application or a program ...

Internet domain - everything you need to know about it

LATEST JOB OFFERS IN IT!

Any cookies that may be necessary for the website to function and is used to collect personal data via analytics, ads, other embedded contents are termed as non-necessary cookies. It is mandatory to procure user consent prior to running these cookies on your website.