WindowsMania.pl
Home PC Y to Z - How do I convert y to z on the keyboard? 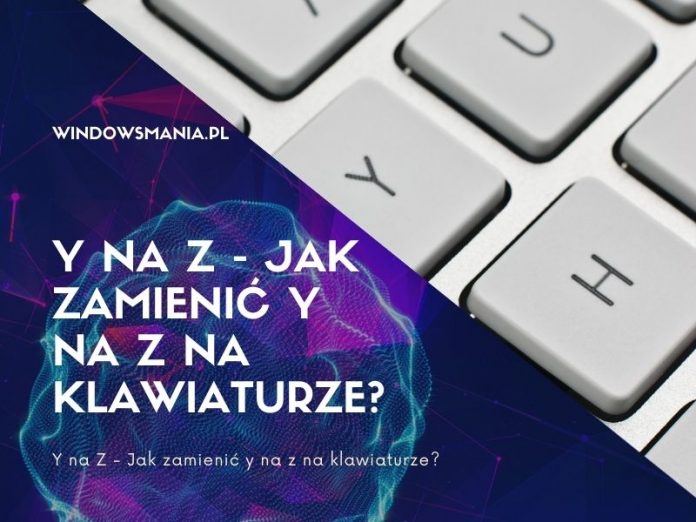 Does your keyboard type y instead of z? We will explain how to fix this, how to change y to z to keep the keyboard working as it used to be.

The keyboard is typing y instead of z - why?

The reason for this phenomenon goes back many years, when typewriters were used instead of typing computers. The letter pattern used on the keyboard was as follows: QWERTZ. It was a keyboard with instead of y, which is different than on your computer. Due to the content of Polish letters in our alphabet, a standard typewriter was not available to us. The Poles remedied this by adapting German typewriters to Polish. They also had special characters, so changing them was not particularly difficult. The typist's keyboard became popular also later, among the first computers, in many European countries.

Also check: How to turn on Polish characters on the keyboard?

With time, this arrangement of letters was replaced by QWERTY, i.e. programmer's layout where y is instead of z. This is the version most of us are working on today. In new computers, Windows installs both keyboard versions as default for Polish users. There are a few simple ways to switch between these versions, including a hotkey that converts y to z and makes a few other minor changes. You can activate it by accident. Then the following text may appear: how to replace z with y; ya instead of z to y. This problem is not only the replacement of yiz, but also errors with displaying Polish characters. Don't worry - there's a simple solution to convert from to y and get your keyboard back working properly.

What to do when the keyboard changed?

If your cry for help looks like this: replacing y with y, instead of z replacing y with z - you've probably encountered a very common problem. However, there is no need to worry. The keyboard layout, i.e. the keyboard rearrangement, is very simple. You can convert y to z in several different ways.

How do you convert y to z? The most efficient way to change y on the keyboard is to press a combination of keys. It is important to remember about the order of the keys pressed. The solution is CTRL and SHIFT which are located at the bottom of the keyboard. Accidentally pressing these buttons is the most common reason why there is y instead of z on the keyboard. These buttons will allow you to freely switch between keyboard layouts and convert y to z, but be aware of the correct order.

First press and hold the CTRL key, then SHIFT. This is the easiest way to convert z to y and vice versa - y for z.

How to convert y to z on the keyboard - other ways

Y keyboard instead of z - there are more methods to fix this problem. If your device writes z instead of y, you may have the wrong language set on your computer. Don't be fooled by the choice of Polish (214)! If z turns into y, you need to set the language to Polish (programmer's). The ways to convert y to z vary depending on the model of the computer you are using.

How to change from to y to Windows XP?

Go to the control panel, regional and language options, "languages" tab and select Polish (programmer). The problem with y on the keyboard should be solved!

How to change y to z on Windows 7?

Now you know what to do if y is z on the keyboard. Rearranged letters on the keyboard are not a reason to panic. There are several ways to switch from to y - remember these practical tips for the future.

Maniak - 27 April, 2021
0
YouTube ads are becoming more and more popular By far, YouTube is the most popular website in the world that allows its users to play video clips and upload them for free ...

How to get access to the VOD movie library?

How to turn off notifications in Chrome?

Unfortunately, the application has been stopped - what should I do?

This website uses cookies to improve your experience while you navigate through the website. Out of these cookies, the cookies that are categorized as necessary are stored on your browser as they are essential for the working of basic functionalities of the website. We also use third-party cookies that help us analyze and understand how you use this website. These cookies will be stored in your browser only with your consent. You also have the option to opt-out of these cookies. But opting out of some of these cookies may have an effect on your browsing experience.
Necessary always Enabled
Necessary cookies are absolutely essential for the website to function properly. This category only includes cookies that ensures basic functionalities and security features of the website. These cookies do not store any personal information.
Non-necessary
Any cookies that may be necessary for the website to function and is used to collect personal data via analytics, ads, other embedded contents are termed as non-necessary cookies. It is mandatory to procure user consent prior to running these cookies on your website.
SAVE & ACCEPT
MORE HISTORY
PC

The disk is write protected - how to solve the problem?