WindowsMania.pl
Home Business Who called, or how to check whose mobile number is it? 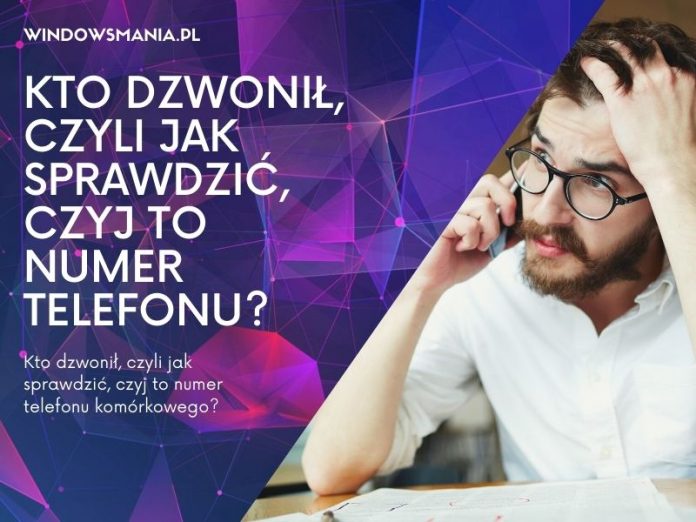 It's not just introverts who don't like answering phone calls. There are people who do not like phone calls, especially those who do not know who called. However, the number of antifans of telephone calls from unknown numbers is constantly growing, and not only because of the characteristics of these people. After a dozen or so phone calls from the bank with a special offer, invitations to shows of massage chairs or kitchen utensils or information about winning a competition in which you did not participate, you can change your approach to answering calls from unknown numbers. And it's not just reserved numbers. If, after the next call, you wonder what the number is, or you just want to get more information about it before you call back, read on and we'll tell you why it is worth doing it and how to exactly approach this task.

Whose phone number is it - why is it worth checking?

Are you wondering how to check the owner of a phone number and is it worth doing it at all? Such verification will not hurt anything, and on the contrary - it can help and protect you. A call with a financial offer from a bank or an invitation to a show of kitchen accessories sounds harmless. However, there are also such combinations, the only task of which is ... to extort. You may argue that you will not fall for an unnecessary purchase, but sometimes it is enough to simply call back on the phone number and your bill will be charged a large amount. In addition, unwanted phone calls can be simply irritating, and each of us wants to relax after work or at the weekend, and not once again wonder who called me.

How to find out whose mobile number is this?

If you are once again considering picking up or not, or you just find another missed call on your smartphone's screen, it's definitely worth finding out who called and whose number it was. Unfortunately, times have changed and the protection of personal data has also entered a slightly higher level than a few or a dozen years ago. In the past, it was enough to open the phone book and it was easy to get information about who called, but also for example the address of that person. Today it seems unthinkable, and finding out about the owner of a private phone number is difficult. However, there are sites that can help you with this, such as Truecaller.

However, you probably deal with calls from various institutions and companies much more often - in this case, some of them can be important, while the rest will not arouse your interest. In this case, the easiest solution to find out what the number is is to simply type it in Google search engine.

There are many websites that collect user feedback on phone numbers, so you will quickly find out whether the number is rated as safe or, on the contrary, unsafe. There are also bothersome numbers, which are not dangerous, because they come, for example, from banks, but at a given moment you may not want to listen to the consultant telling the next offer for several minutes. If it is a negative phone number, it's best to block it right away. This way you will be sure that the contact will not be repeated, and you will not be wondering again what the telephone number is.

How to disable automatic updates in Windows 10?

What's the best graphics card for your computer? Shopping tips

What to look for when choosing an office multifunction machine?

What features should an ideal smartphone have?

Ukrainian characters on the keyboard - how to write in Cyrillic?

How to recognize songs with google

How do I create a Facebook event and change its status from private to public?

How do I transfer a large file over the Internet?

Who called, or how to check whose mobile number is it?

This website uses cookies to improve your experience while you navigate through the website. Out of these cookies, the cookies that are categorized as necessary are stored on your browser as they are essential for the working of basic functionalities of the website. We also use third-party cookies that help us analyze and understand how you use this website. These cookies will be stored in your browser only with your consent. You also have the option to opt-out of these cookies. But opting out of some of these cookies may have an effect on your browsing experience.
Necessary always Enabled
Necessary cookies are absolutely essential for the website to function properly. This category only includes cookies that ensures basic functionalities and security features of the website. These cookies do not store any personal information.
Non-necessary
Any cookies that may be necessary for the website to function and is used to collect personal data via analytics, ads, other embedded contents are termed as non-necessary cookies. It is mandatory to procure user consent prior to running these cookies on your website.
SAVE & ACCEPT
MORE HISTORY
Business

Email address - where is it best to set up an e-mail?